Is Your Gaming CRT Exposing You to X-Rays?

Motivated by this discussion at UKVAC I decided to run a little experiment to find out if your typical gaming CRT leaks any measurable X-rays. Tan while having fun? Let's find out.

My setup involved testing three tubes in my collection used from time to time for testing arcade pcbs, retro consoles, as well as micro computers. I believe these models are also commonly found among the gaming community and they should be somehow representative.

In front of each tube an X-ray sensor is placed at different distances: 3cm, 30cm, 60cm. X-ray activity is sampled during 180 seconds during each run, then compared against ambient readings (tube turned off).

Initially the X-ray sensor is left to warm up for a good 10 minutes to obtain constant ambient reads.

I'm afraid to break the news but... there's no such thing as a free tan while retro gaming. At no time any of the tubes tested presented any abnormal sensor reads indicating the presence of X-rays. To put things into perspective I have included a table below comparing the different scenarios together with reads of the sensor exposed to radiation from a controlled x-ray source. 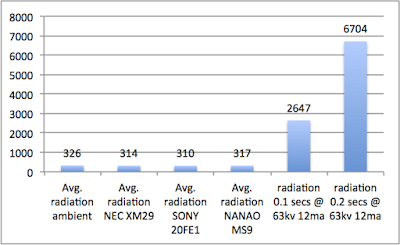 I'm no expert on this matter, but even if the energies inside the tube are high enough to produce X-rays, the glass in your CRT has lead in it to block those from reaching you. Perhaps someone with enough expertise could confirm these assumptions.